The Wakatobi Marine National park is the third largest National Park in Indonesia. Its name comes from an acronym of Wangi Wangi, Kaledupa, Tomea and Binonko, the four islnads found in the park. 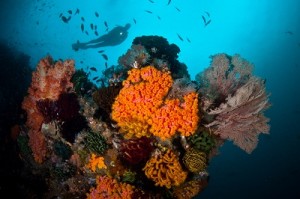 More than a 100,000 people in the area depend on fishing for their income and livelihood. However, The Nature Conservancy, working closely with WWF-Indonesia, has established no take zones in specific fish spawning aggregation areas and the results are showing.

There are 396 species of coral found in the park and an amazingly colorful cross-sectoin of bio-diversity. Turtles in the park include the Loggerhead, Hawksbill and Olive ridley sea turtle. On land you might see the Brown Booby, the Common Kingfisher, and the Malaysian Plover. 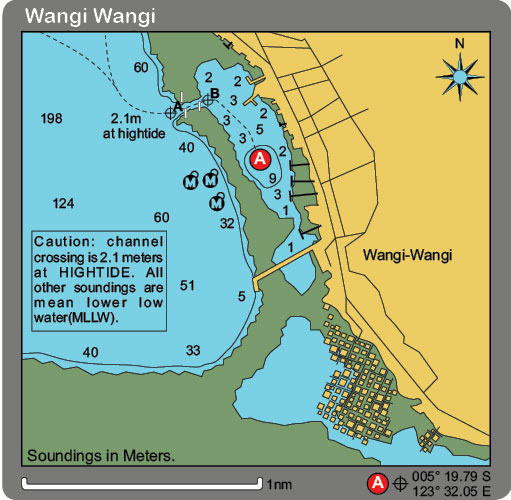 The seasons are well developed in this part of Indonesia and strong SE trade winds blow from May through October. During the NW monsoon season winds are from the W. During both seasons winds greater than force 5 are rare. Rain squalls occur year around with hard squalls most frequent in December and January. Thunderstorms occur most often during transitional months.

The Indonesia Through-Flow sets NE through the Wakotobi region in a massive eddie formed around the south coast of Sulawesi. This general NE set is also influenced by the monsoon season surface currents. During the SE monsoon season a WSW current is often experienced while during the NW monsoon season a more easterly current sets in.

The indigenous peoples of these islands belong to the nomadic sea-faring Bajau tribe.