Morotai is the northernmost Island of Maluku and is rugged, deeply forested and rarely visited.  There are many coastal villages around the Island and most of them can only be reached by sea. Daruba is the islands largest town and a paved road leads up the East coast as far as Berebere.  Many beautiful islands and islets are located off the south-west coast and provide for some interesting cruising grounds.  There are some good diving locations around the island as well as some world class surfing spots along the North and East shores. 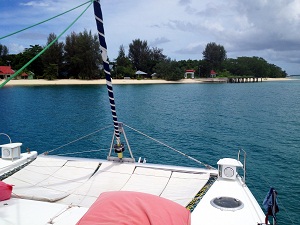 Morotai played a major role during WWII and is perhaps most famous as the Allied base during from where General MacArthur launched his assault against the Empire of Japan.

Although North Morotai is fairly close to the NW Pacific typhoon area it is considered to be typhoon free. Although a direct hit has never occured, passing cyclones should be monitored.  Cyclone season runs year around. 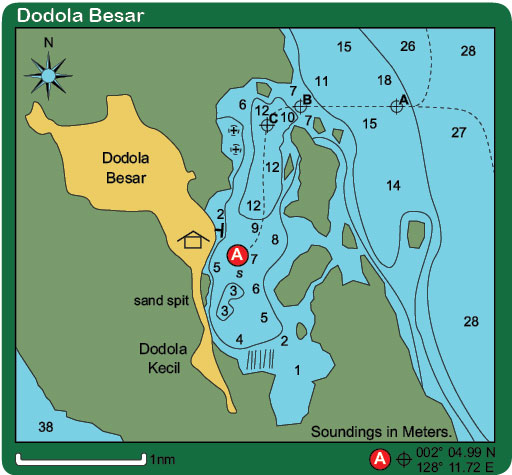 During the SE/SW monsoon season winds are from the South.  From June-Aug heavy showers from the SSE, called ‘angin lelei’, occur mid morning and are accompanied by a heavy sea.

During the NW/NE monsoon season from Dec-Mar, winds blow from the N and occasionally from the NE.  Heavy squalls and short duration storms blow out of the NE Currents are generally light in open seas.  Strong currents may be experienced off the NE end of the Island.

The Indonesian Throughflow starts its journey here and because of such, currents have a stronger S setting component.

Rau strait has a least depth of 6 meters and is easily traversed.  Tidal currents and eddies may be experienced but are of no great danger.