Nanggroe Aceh Darussalam is a special region of Indonesian and is thought to have been the place where the spread of Islam in Indonesia began. Relative to most of Indonesia, it is a religiously conservative area. 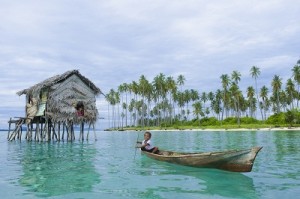 Dress codes are strict, and rules and expectations can vary from village to village. Whether or not the local dress codes apply to visiting foreigners and cruising sailors is debatable. Areas with developed tourism facilities are clearly relaxed and visitors can be seen in shorts and t-shirts similar to that seen in Jakarta or Bali.

When going ashore it is considered courteous to dress conservatively and locals will respond respectively well for your understanding.

The Aceh chapter of our Guide covers the West coast of Sumatra from Ujung Tuan to Ujung Raya, including the off-lying islands.

The W coast of Sumatra is a high, rocky coast with the occasional strip of sand by the sea. Numerous small streams discharge their waters along the coast but most of them are barred and have heavy surf and are inaccessible to deep draft vessels and cruising sailboats.

Many small bays along the Sumatran coastline offer protection from NE monsoonal winds. Most are open to the W and S and near constant swell can make them uncomfortable at best.

Aceh was the closest point of land in Indonesia to the epicenter of the 2004 earthquake and tsunami and much of the geography in the area was changed. Whole islands were washed away, ports where closed, and reefs were thrust skywards while others were submerged. Expect charts to be inaccurate and give all dangers a wide berth.

The influence of the SE monsoon and the NW monsoon of the southern hemisphere are felt as far N as 2 N.

At around 3 degrees N the northern hemisphere monsoonal winds begin to dominate and from this point on will be respectively referred to as the SW monsoon and NE monsoon. Expect monsoonal winds to increase in strength and seasons to be more pronounced and developed further North along this coast.

From May to October during the height of the SW monsoon season winds are predominantly SW, S and SE at a rate of 8-16 knots during the day. Heavy squalls from the NW are frequent and there is often a considerable sea along this coast. At night a land breeze develops close to shore and winds come from the N.

From December to March the NE monsoon period predominates and is less strongly marked. There is usually a gently S breeze in the morning, followed by a calm, and then afternoon NE winds of 7-10 knots continue through the night. Heavy short duration squalls come from the NW.

There is significant rainfall throughout the year in Banda Aceh and precipitation is at its heaviest during November and December.

Currents set mainly NW at a maximum rate of 2 knots near the 200m curve. The current seldom sets SE but may sometimes set onshore. Beyond 8 miles from the coast a surface current caused by the wind dominates and rarely exceeds 1 knot.

Currents to the west of the Banyak Islands may be the reverse to those flowing between the islands and the coast.

Tides on the W coast of Sumatra are semi-diurnal and of a small range, rarely exceeding 1.2m.