Lombok has some of the best cruising grounds in Nusa Tenggara and is a personal favorite of ours. The water is clean and clear and there are many exciting surfing and diving locations with good protected anchorages nearby. 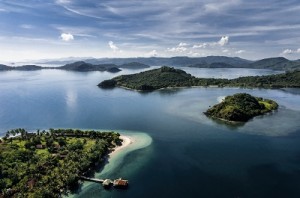 The island is home to 3.2 million Indonesians and 85% are Sasak and Islamic. Balinese, Javanese and decendents of Chinese and Arabic traders make up the remaining peoples of Lombok.

Roads are good and transportation from most anchorages can be easily arranged. There are two marinas in Lombok each will be discussed further in their respective chapters.

The Lombok Strait to the West of the Island marks the biogeographical division between the Asian continental shelf and the Australian continental shelf. Plants and animals on the West side of the strait (Bali) have Asian origins while those found on the East side (Lombok) are more closely related to Australian species. The division is more famously known as the ‘Wallace Line.’

Gunung Rinjani located in the North of Lombok is the second highest volcano in Indonesia and has a height of 3726 meters. The waters around Rinjani and up to a few miles offshore often have their own particular weather patterns and do not necessarily follow the monsoons.

The Alas Strait separating Sumbawa from Lombok often funnels SE trade winds up the strait with a more S component to them. During the NW monsoon season a S wind can also be experienced in the Alas strait. Currents tend to Flood North and ebb S with the S setting current of longer duration. Maximum rates experienced are 4-5 knots with 2 knot currents being the norm. Often there is no North current and the S set only slows. The moon’s upper transit would be the best time to look for a N setting current in the Alas strait.

The Lombok strait is the main artery for the Indonesian Through Flow (ITF). Currents are fierce and S setting at almost all times of the year. N setting counter-currents are frequently found close in off either coastline and in the vicinity of Lembongan in the Badung strait. 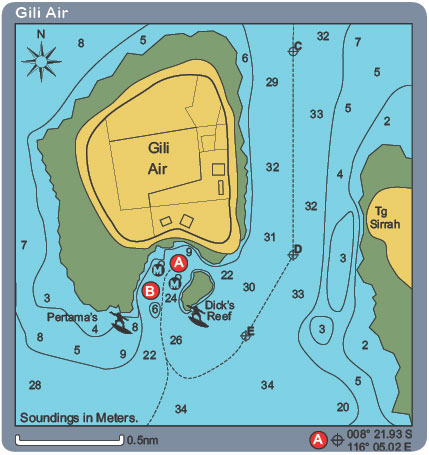 Rates vary depending on the strength of the monsoon and the phase of the moon but speeds of 3-5 knots are not uncommon. The strongest rate with a maximum of 8 knots occurs one week after full and new moons during the SE monsoon season.

N setting currents are most likely to be found 2-3 hours before and 2-3 hours after the moon’s UT and LT. When heading N stay as close to the coastline as possible. Often a current line is visible between calmer water heading N close to shore and nervous choppy water outside heading S.

Caution: During S winds and wind against tide conditions, the area S of the Nusa Penida lighthouse is extremely rough. Large overfalls, whirlpools and standing waves can attain heights dangerous to small craft.