Raja Ampat is Indonesia’s most fascinating cruising grounds. It is truly a paradise on earth and likely will be the highlight of your trip. The Geography, the diving, the wildlife, the culture, and the hospitality of the people are all legendary. The variety of marine life is staggering and too long to attempt to list.

Alfred Russell Wallace chose Raja Ampat as a base to study and during a Malarial attack, the theory of evolution was born. Thanks to the Indonesian-Through-Flow the water is vodka clear and the diving ground are some of the best in the world. 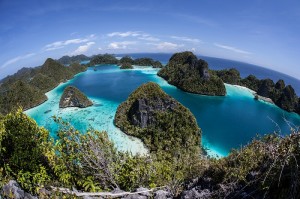 With the equator passing directly over Raja Ampat winds can be expected to be light with frequent calms. The SE monsoon trade winds come from the ESE from June through November and are very much locally influenced by land and sea breezes. During the NW monsoon season winds are from the NW, N, and NE but cannot be depended on. Strong storms blow out of the N and NW.

There is no defined wet or dry season and rainfall is heavy through out the year with June and July being the wettest.

Currents in the open sea are influenced by the monsoons and are not strong. A general N to S set can be expected by way of the Indonesian-Through-Flow. Tidal currents are greatly influenced by local geography and will be discussed individually in their respective chapters.