The Lingga Archipelago is one of the least visited areas of Indonesia and almost zero English will be spoken. Transportation is non-existant and the locals are a mix of Malay, Bugis and Hakka Chinese. There are ferry services to Batam and Pinang from the main town of Diak, but land based transportation is virtually non-existant.

The marine environment is quite healthy. With a low population density and no tourism, Lingga’s remoteness has allowed some coral gardens to flourish. Water clarity is often poor however and visibility can be horrible. On clear days it’s definitely worth it to take a look around.

Coastlines and islands are mostly low alluvial flats. Gunung Daik with its unique three peaked profile stands in the West of Lingga Island.

Given its proximity to the Equator, winds around Lingga are often very light. 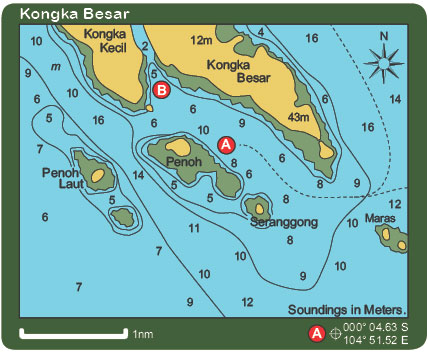 With anchorages on both sides of the Equator the Lingga Archipelago is no stranger to impromptu ‘equator parties.’