Flores was once called Pulau Nipa (Snake Island) before the Portuguese arrived and renamed it Flores (Flower Island).

Flores is a long, thin island with a mountainous backbone running from East to West and huge rugged peaks add dramatic backdrops to most of the anchorages. 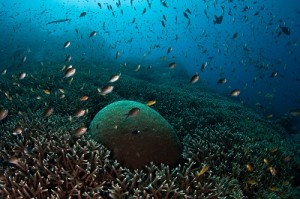 Coastlines and lowlands are hot and dry, while the interior can be surprisingly lush and deep in the highlands it is often cold. There are 14 active volcanoes from East to West and the people and culture of Flores are as varied as the landscape.

Although Christianity and Islam are widespread through-out the island, traditional animistic beliefs and rituals are often still practiced daily.

The N coast is very irregular with numerous projecting points and inlets. Many of the bays provide good anchorage during the monsoons, with some providing year around shelter.

Detached dangers lie up to 6 miles off the N coast and most of these dangers lie within the 200m curve.

During the SE monsoon season winds are from the SE. From July to September trade winds can be very strong along the southern coast of Flores while at the same time calm or light across the whole northern coast. In the NW monsoon, winds are out of the NW and W with rain and squalls coming out of the W or SW. 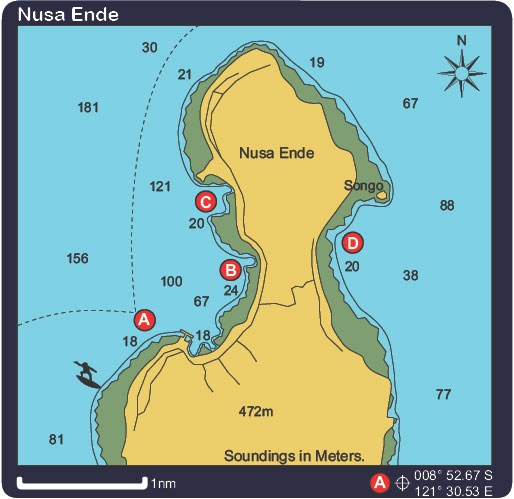 Currents off the N coast of Flores usually follow the direction of the prevailing monsoon with a rate of less than 1 knot. That is to say, currents set W during the Southeast monsoon season and set E during the Northwest monsoon season.

Selat Flores runs between Adunara and Solor to the E and Flores to the W. The strait is deep and clear of dangers. At the northern end of Selat Flores the channel narrows and has a least width of 0.2nm and can experience currents up to 7 knots. Low powered vessels are not to navigate this strait. N setting currents are most likely to be found during the moons UT or LT.

Selat Molo, between the W coast of Flores and the island of Rinca should not be used. Currents of up to 12 knots have been experienced and large overfalls are common. Selat Lintah should be used instead, passing between Rinca and Komodo Islands.