Although technically both Anambas and Natuna are part of the Riau Province we think they deserve their own chapter considering their distance and isolation out in the South China Sea. 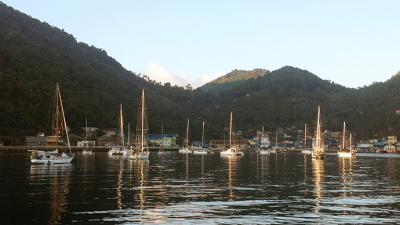 The capital of Anambas / Natuna Regency is Tarempa on Siantan Island. There are 255 islands in the Anambas / Natuna area but only about 26 islands are inhabited. There is little in the way of provisioning outside of Tarempa and even that isn’t all that good. It is best to arrive here fully equipped. The islands all provide white sand beaches, clear waters, and sheltered anchorages. There are pristine reefs for snorkeling and diving and the people are generous and rarely receive visitors. Tarempa is scheduled to become a Port of Entry in 2017 with full CIQP clearance facilities into Indonesia.

NOTE – Navionics charts are unreliable in this area. When close to shore use a bow spotter and navigate by eyesight with polarized glasses. A number of yachts in 2015 struck the reef between Pulau Semut and Pulau Matak by placing to much faith in their charts. Although it is not shown on the charts, there is a barrier reef connecting these two islands and the bottom shoals quickly from 18m to zero without warning. Pulau Semut Danger: 03° 23.176’ N 106° 16.858’ E Dry Reef.

During the SE/SW monsoon season winds are from the S and light, usually between 4-10 knots with infrequent light squalls and showers. This pattern begins to form from March to May and covers the whole area by June lasting through to August. During September to November the airflow is reversed and the NW/NE Monsoon begins to spread S to the Equator. By December the NW/NE monsoon weather pattern prevails over much of the South China Sea. During the NW/NE Monsoon season winds are from the N and average 8-16 knots. Gale force winds are more common in this season and winds of 28-33 knots can be expected with passing storm systems lasting for days.

During the transitional months the winds are mainly light and variable with occasional short duration rain squalls. 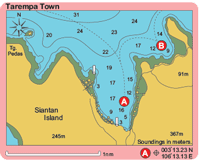 Currents follow the monsoons and set N from May to September and S from October to April, with rates of up to 2 knots. Tidal currents (and not monsoonal currents) have been observed in this area, from mid-July to mid-September and again in December, to set to windward against the monsoonal drifts, for a part of each day. During these times wind against tide chop can develop but is generally not of considerable size.

Submerged or partially afloat drifting logs, roots and palm trees, etc., can be encountered between Kepulauan Natuna and Kalimantan.