The Bangka-Belitung area is made up mostly of small hills, lower plains, and white pepper fields. Coastlines alternate between beautiful white beaches to mangrove forests. Mount Tajam is the highest point in the islands and has a height of less than 500 meters. 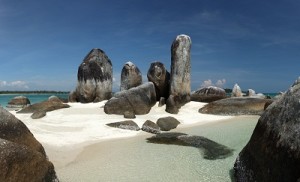 Large granite boulders are sprinkled about the coastlines and out into the water creating beautiful little islands and islets and Belitung has been compared to the British Virgin Islands.

A great number of islets, banks, and reefs lie off the coasts, up to a distance of 30 miles. And a number of new dangers were found during the last survey of these waters. Even the most accurate survey does not exclude the possibility of the existence of further dangers. Reefs are all steep-to and soundings do not give adequate warning to the existence of offshore dangers.

During the SE monsoon season from June through September, SE trade winds veer near the equator and are more S than SE. Trade winds are relatively calm and average speeds of 7-16 knots can be expected. Squalls are common and of short duration.

During the NW monsoon season winds come from the N at 4-10 knots and squalls are more frequent, especially at night, and of longer duration. Rainfall is abundant at all times of the year.

The principal passages are: Selat Bangka, Selat Gelasa, and Selat Karimata. Currents alternate in direction twice a year in phase with the monsoons. During the NW monsoon the flow is from N to S at a rate of about 1 knot, and during the SE monsoon the flow is reversed.

Selat Bangka is 120 miles long and is the preferred channel when passing to and from Selat Sunda. The Sumatran side of the strait is shallow and mud flats extend up to 7 miles offshore.

Along the Bangka side of the strait there are numerous small bays with manegable depths for anchoring.

Selat Gelasa is considered neither as safe nor as well lighted as Selat Bangka.

Selat Karimata is by far the easiest of the three channels and is the customary cruising route taken by vessels heading to and from Singapore from the Java Sea. Currents are monsoonal and generally less than 0.5 knots.