Komodo National Park is home to the famous Komodo dragon and is rich in both terrestrial and marine life. Whale sharks, sunfish, manta rays, eagle rays, blacktip and whitetip sharks can all be found among the parks fantastic coral gardens. 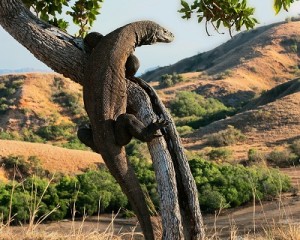 Dragons are found on five islands: Komodo, Rinca, Padar, Gili Motang, and some parts of Flores. They do have a poisonous bite and guides are a must when exploring on land.

Despite all the press going to these giant monitor lizards, they are not the most dangerous animal on the island. That honour goes to one of the twelve terrestrial snake species found in the area and including the: Javan Spitting Cobra, Russell’s Viper, White-lipped Pit Viper and the Blue Lipped Sea Krait. The once mighty salt-water crocodile is no longer found in the area.

Islands are mountainous in nature and covered with a knee high scrub and reed savannah. Numerous hiking trails are cut along the foothills and most islands offer spectacular viewpoints. Beaches are of the best found in Indonesia with mixed red and white coral granules often giving the appearance of pink sand.

From April to October winds are from the SE and S, and are strongest during July and August. Wind against tide situations can get fairly rough in the straits during these conditions but distances are small and rough areas can be traversed relatively quickly. November and December are transitional months and calms are common. During the NW monsoon season from late December to March expect winds out of the W and NW.

Currents in between the islands can be fierce and rates of 3-5 knots are not uncommon. With large tidal changes expect a maximum rate of about 6 knots.

Selat Sape is the strait found between Sumbawa and Komodo Island. It is the preferred N to S shipping channel between Flores and Sumbawa and is the easiest of the channels to pass. 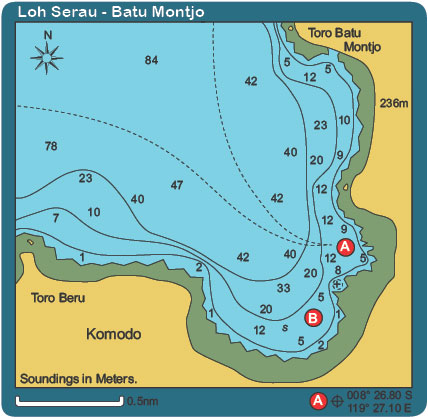 Selat Lintah between Komodo and Rinca Islands is often used by cruising sailors as its shores are littered with some of the best diving and cruising grounds in Indonesia. Selat Lintah is easily traversed during slack tide conditions. Admiralty Pilots recommend not using the small passage between Padar Island and Rinca Island although we have never had any difficulty here.

Selat Mola between Rinca and Flores should not be used by low-powered sailing craft as currents in excess of 12 knots have been reported.

Currents in all three straits generally run S with a stronger force and longer duration. N setting currents are best found from about 3 hours before to 1 hour after the moon’s upper and lower meridian transits.