Java is the world’s most populous island. With a population of about 140 million people it is one of the most densely populated places in the world and Java alone holds 60% of the Indonesian people. 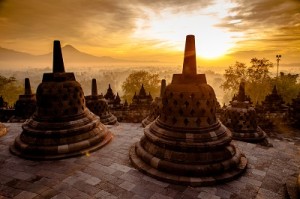 The N coast of Java is low, marshy and thickly wooded and generally uninteresting as a cruising ground. The water is shallow miles out from the coast and clarity is poor. Rivers flow into the sea along the N coast and bring down a considerable amount of debris and rubbish.

The S coast is high and consists of steep rocks and rugged points with great depths close inshore and relatively few bays and harbours offering shelter. Heavy surf near constantly breaks all along this coast.

Both extremities of Java are capped with large National Parks and it is these areas that make up the majority of the cruising grounds for the island of Java.

Alas Purwo National Park in the East has some of the best surfing spots on the planet. There are also good diving locations, trekking and 434 square kilometers of old growth tropical rain forest.

To the W is the Ujung Kulon National Park, home to the endangered Javan Rhinoceros, including Peucang and Panaitan protected islands, and the famous Anak Krakatoa volcano. All offering rewarding cruising grounds and a chance to step back into a little history.

Along the N coast of Java during the months of April to November, SE trade winds will often blow more E than SE. During the Northwest monsoon season from December to March, winds from the WNW and W can be expected to blow with considerable force. Between the monsoons, calms are common with occasional short duration squalls and thunderstorms.

At the height of the season, winds veer further and blow from the NW. During the intermittent seasons calms and S winds predominate with the occasional short duration squall and thunderstorm. N winds are very rare.

Currents along the S coast of Java generally set SE and are stronger during the NW monsoon season.